Yesterday we lost our beautiful little ‘kitty’.  She was ten years old and until Monday she had been very well.  Kitty was a wonderful cat – with a coat as soft as feathers and a girly meow which sounded more like a squeak.  She was part of our family and we are all very sad that she went so unexpectedly and so early.  We never knew she had a huge tumour.  She died peacefully at 7pm yesterday helped on her way by our Vet and in my arms.

As a tribute I have edited two previous posts from the archives.

She enriched our lives for a decade.  We will miss her. 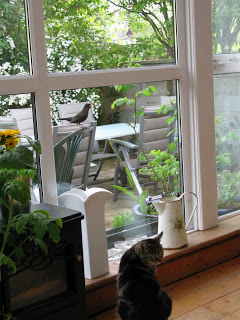 I am very glad that I don’t own a gun and that I live in country where it is generally against the law to own one. Because if I had a gun, last week I would have shot my dog, Dylan. He had a charming dose of the trots.  This week I would shoot Mrs Blackbird. Yep, that’s right. Mrs Blackbird. I would point my gun and BANG. Feathers all over the place. And then PEACE. QUIET.
Now before you rush to judgement – let me ask – have you ever heard an agitated Blackbird?  They make the most annoying racket and it goes on and on and on. The problem Mrs Blackbird with this particular bird is that she is a mammy. She must have a nest full of baby blackbirds in the tree at the end of the garden. I am also assuming that this particular Mrs Blackbird was a bit sloppy when it came to doing her background research on a suitable location for her nest. She clearly saw the tree and letting her heart rule her head, decided “This is it”. “This is my tree. This will be my new home.” Had she come back for a second viewing before finally making her mind up (and had she bothered to tune into Kirsty and Phil she would have known all this), she would have realised that she was making a nest at the end of a garden belonging to four cats.
Now my cats are generally laid back, lazy moggies who venture into the garden to lie in the sun or do their business. They have a cat flap to facilitate these comings and goings. Youngest of the foursome is Kitty and she occasionally brings home a field mouse. She has never (to my knowledge) caught a bird. But anytime any of the cats venture into the garden at the moment, Mrs Blackbird comes flying out of her fabulous tree, roaring and bawling all kinds of birdie obscenities. She perches on the swing and keeps up her tirade until the cat in question retreats indoors again. But when Kitty puts one paw into the garden she goes ballistic altogether. Squawking and screeching at the top of her lungs and dive bombing Kitty as she wanders down the path.
But this morning took the biscuit altogether. I was sitting at my laptop trying to work on a story. I have gotten somewhat used to the incessant squawking but all of a sudden it seemed to go up a gear and get louder. “Oh shut up” I roared as I turned around to see Kitty sitting indoors on the window sill and Mrs Blackbird perched on a patio chair directly outside the window telling Kitty exactly what she would do with her if she even put one leg into the garden. I was stunned.
I will admit to admiring Mrs Blackbird’s tenacity and her dogged protection of her offspring. But clearly her hormones have gotten the better of her and I am worried for her sanity. Without a gun I am just praying that all her babies fledge successfully and soon. And that Kitty stays as lazy as she is, so we can all live happily ever after!

A FEW DAYS LATER I POSTED AN UPDATE…..

I believe in Karma – otherwise known as what goes around comes around.
The Mrs Blackbird – v- Kitty saga has continued apace since I posted ‘Bang Bang Birdie’ last week. Although I wouldn’t have thought it possible, Mrs Blackbird has upped her game. Kitty now only has to pass a downstairs window and Mrs Blackbird zooms up the garden, screeching bloody murder.
Kitty’s favourite daytime haunt is Mia’s bedroom, where she either curls up on the bed or sits on the window still surveying the garden. No more. Mrs Blackbird (who clearly has a powerful set of binoculars in her nest) spots her immediately and takes up position on the outside sill, yip yipping for all she’s worth.
Kitty is now terrified of going into the back garden and has taken to exiting and entering the house through windows at the front of the house. Needless to say we all think this is hilarious and have been regaling neighbours, friends and family with stories of Kitty being totally intimidated by a blackbird. “Kitty is a scaredy cat” and “Kitty’s afraid of a blackbird” echoes through the house regularly and guess who laughs loudest – yep, yours truly. What I had missed however, was the gimlet eye Kitty was throwing my way in the last day or two.
Last night, Kitty clearly decided to take matters into her own paws in order to restore her feline credibility. And so she did what Kitty does best and caught a mouse. A little field mouse, which she (brace yourselves ladies) brought into my bedroom, through an open window, at 1.30am this morning. Needless to say she had chosen her moment cleverly as my other half was away.

So I woke up, alone in my bed, aware that Kitty was making odd sounds in the bedroom. I sat up and turned on the light. And there she was staring straight at me, saying “scaredy cat? Lets see who is scared now?” At her feet was the little mouse. As the implications of this situation seeped into my sleep fuzzed brain, I prayed “please God in heaven may this mouse (who was not moving) be dead”.

With that the mouse took off under my chest of drawers. And Kitty decided to leave him there as she vanished under the bed. By now I was up and out of bed and lifting anything off the floor that I thought a mouse might climb into (shoes, bags etc), I then opened the curtains so that the open window was clearly visible and accessible, on the off chance that Kitty might think enough was enough and remove the mouse from whence it came. Wishful thinking all. Mouse stayed put and so did Kitty.
There was nothing for it but to leave them to it and hope that by morning Kitty would have done her worst and I could then remove dead mouse from the room. I decided to sleep in the spare bed in Mia’s room. But as soon as I lay down, my mind was full of what could transpire during the night. Mouse caught up in my duvet, taking refuge in my pillow, my dressing table being thrashed as Kitty pursued him across it, Tom and Gerry style. No, I decided I had to be grown up about this and go in and get rid of mouse. So I took a deep breath and woke up Mia.
Mia, I should explain is my youngest. She is 9 years old and she (like us all) loves animals. But Mia loves animals in a different way to the rest of us. When she was a toddler I would regularly find her barefoot in the garden with ants crawling over the legs. She loved wood lice and made homes and cities for them. She collected snails. And lately she has been bugging me to get her a pet mouse! 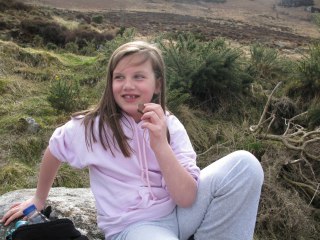 Mia readily agreed to be the one to remove the mouse. I equipped her with my industrial workman gloves and got a torch and we re-entered the room. All was as before and Mia on hands and knees reported that “ahh, he’s cute and yeah he is there, under the chest of drawers”. We discussed tactics which broadly speaking involved me moving the furniture and shouting instructions while Mia calmly and swiftly cornered little mouse, cupped him in her gloved hands and headed for the window from where he was launched into the night.
Mia also intervened when I attempted to grab Kitty and launch her after the mouse!

And so it was that at 3am this morning Mia and I were in the kitchen having a celebratory glass of juice and me handing over the €5 bribe reward to my darling, brave, heroic, animal loving daughter. As we retired back to bed, we passed Kitty on the stairs and I swear she was grinning from ear to ear! I don’t think I will slag her anymore!