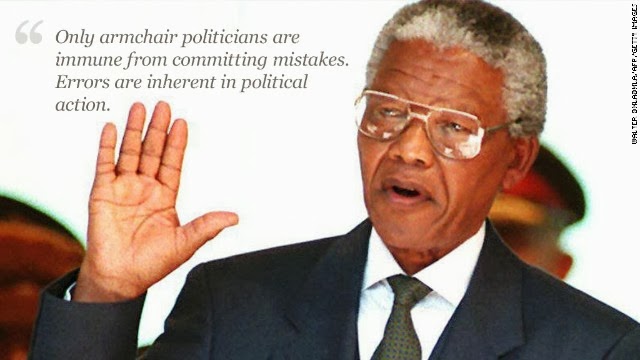 Nelson Mandela.  Madiba.  Father of South Africa.  Peacemaker. Visionary.  Leader. Husband. Father. Grandfather.  Humanitarian. Activist. Politician. Prisoner.
I am relieved that Nelson Mandela’s life has finally come to an end.  I feel sure that the last months could not have been easy.  Although most of us die in hospital, most of us aspire to finish our days in our own homes, with those we love.  Madiba achieved that, which is fitting for a man who achieved so much.
It was during the 80s that the situation in South Africa started to seep into my consciousness.  I was aware of the furore caused rugby teams from these islands who continued to play in South Africa when many sporting teams were boycotting the country in protest against apartheid.   I was aware of the young girls of my own age who had lost their jobs in Dunne’s Stores for refusing to handle South African fruit.
But it was the late 80s before I became aware of this man, this Nelson Mandela.  This was due mainly to the song ‘Free Nelson Mandela’ and the 70th Birthday Concert which was organised in London, featuring some of music’s very best acts including Dire Straits and The Eurythmics.  It was a kind of political Live Aid.  So I thought this Nelson Mandela must be a pretty cool guy.
A few years later, in February 1990 I was glued to my TV as this ‘cool guy’, Mandela, who up until that point was just a silent, invisible figurehead, walked out of prison, hand in hand with his wife Winnie.  He was an old man, albeit an elegant one who walked very erect and slowly presumably savouring sweet freedom.  I, along with everyone else got my first real look at this man we knew but didn’t know at all.
Since then we have all watched this elderly man as he led South Africa into a new dawn of peace.  His presence was welcomed all over the world as he shared his wisdom and his crusade for peace and freedom.  And that make us so very lucky.
Our children and our children’s children and their children will learn about Nelson Mandela.  They will watch videos of him and they will read his speeches.  We however, have been given the privilege of watching Mandela’s journey and that of South Africa in real time.  And for that I am so grateful.
Mandela was a visionary leader.  He was a gifted orator.  But he also had wisdom borne from a deep self knowledge, which I assume came from the long years he spent incarcerated.  He was the physical embodiment of that famous Gandhi quote – “Be The Change You Want To See In The World.”  Mandela walked his talk and did so with grace.
Along with his wisdom was the inner peace of a man at ease with himself and his shortcomings.  “Don’t make me a saint”, he said, “I am no saint”.  But more than this, what made Mandela outstanding as a statesman was his humour.  He was quick to laugh and he poked fun at himself regularly.  He wore his greatness lightly.  And only the true greats of politics have conquered their ego sufficiently to not take themselves too seriously.

The world will wait some time to see his like again.  Thank God for Madiba.  May he rest in peace.