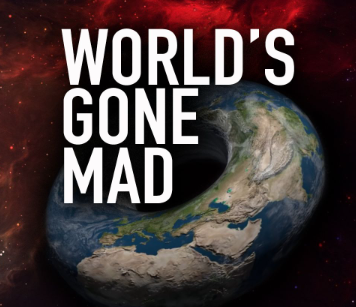 Published in the Irish Independent 7th March 2020 under the title “Virus Madness Enough To Make Us All Run Away And Hide.”

Back in the late 1970s, long before social media, there was a story that did the rounds about a family in England who were becoming increasingly and seriously worried about the threat of nuclear war. So, they began to consider moving away from their native city to somewhere more remote and therefore safer from attack.  They weren’t keen to leave all that was familiar in Old Blighty, so were considering relocating to rural Wales or Scotland.  Then they learned of the Falkland Islands, deep in the South Atlantic, far from the cold war corridor between the US and USSR but still part of the UK.  A perfect location where they could bring up their children away from the talk and worry about fallout, nuclear winters and radiation damage that was increasingly seeping through our consciousness in the late 70s.

Of course, a year or so after they moved to their safe haven it all went pear shaped as Britain went to war with Argentina over the very islands they decided were a haven of safety.

But although it’s a funny story, I fully understand the desire that drove them to find a refuge away from the fear and the increasing unease.  At the best of times, our news media is fairly dark.  Stories of murders, rapes, robberies and accidents along with political skulduggery dominate our newspapers and our broadcast media.  But there are times when it seems that the world is somehow tipping off its axis with what is happening globally: a feeling that things are shifting in a fairly fundamental way that can cause all of us to want to run away and hide.

The election of Donald Trump caused such a moment because it was something that most of us thought just couldn’t happen.  And then it did.  Brexit, ditto. The Brits wouldn’t actually vote to leave, but then they did.  We are still navigating our way through the consequences of these events while dealing with our own homegrown disasters such as homelessness, a health system that fails to deliver for so many of our citizens and now we have the slightly unnerving period in which our country is functioning under a caretaker government while our newly elected TDs seem to be playing some kind of game, the rules of which are somewhat unclear.

And all of this is against the backdrop of a Swedish girl who keeps shouting that the world is on fire and who tells us that while it burns, the adults are acting like children and doing nothing. In our hearts we know she is right and we wonder how we have come to this place where children seem to have a wisdom and ability to see what’s important, while adults seem to be only concerned with economics.

Then along comes this bloody Corona Virus which has us all gone slightly mad in the head.  I like the kind of mad we go when we have snow and we think that bread will save us.  Our current madness revolves around soap which would be funny except we all know that although for most of us, this virus isn’t going to be a huge issue, there are plenty of people with already compromised immunity that are seriously worried and with good reason.

Every time I turn on talk radio it bleeds all of this negativity. I think I have reached saturation point.  And I say that as someone who is a current affairs addict.  I can take quite a lot of negativity.  The last time I had this feeling of ‘enough’ and of ‘stop all the bad news’ was almost ten years ago in October 2010 when we seemed to be sinking further and further into recession. I remember phoning my husband who was running ragged trying to keep his business going and telling him not to listen to talk radio because he didn’t need to hear how dire a situation the country was in.  We were in enough trouble as it was.

This time at least, I don’t have the anger I felt ten years ago but I have a similar sense of exhaustion with the piling on of all this bad news.  In my head somewhere there is a woman who has her hands (washed for twenty seconds, including thumbs with soap and warm water) over her ears and is singing ‘la la la la’ to herself as she rocks back and forwards.  She stops every so often as she thinks of another life, a quiet life, a safe life, a secure life.  Then she remembers the Brits who sought refuge in the Falklands just before it became a war zone and she gets a grip and carries on.  But she moves the dial to Lyric FM because sanity is vital to this carrying on.