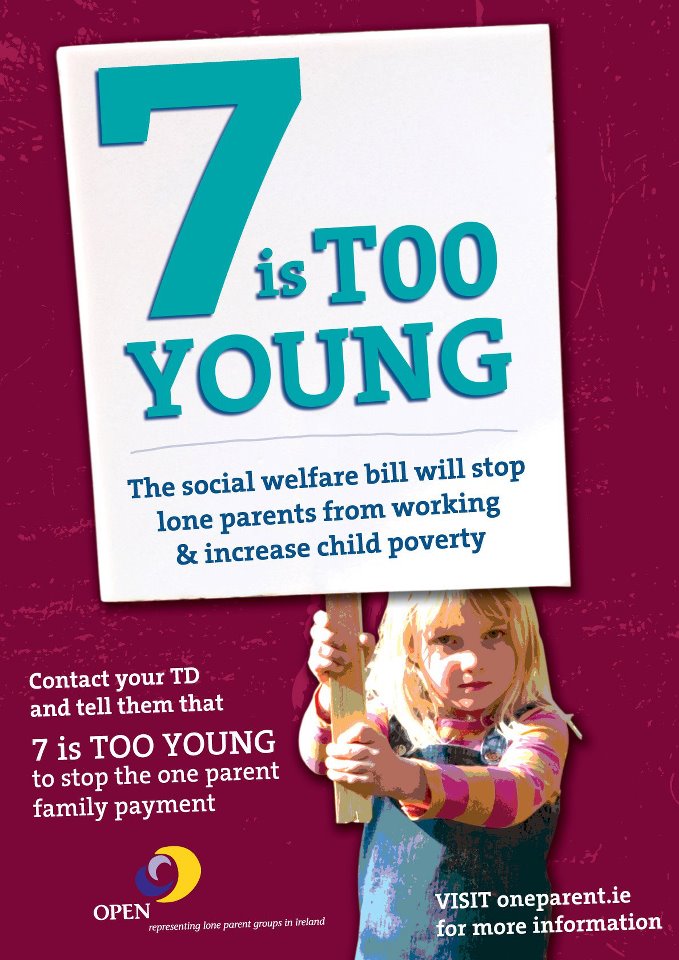 In the recent past Ireland has proved herself to be a dangerous place for young children, particularly those who had connection with the Catholic Church and some of her deviant priests.  Although the said church still seems to have a problem grasping the extent and seriousness of this issue, most of us would agree that the country is now clearly a much safer environment in which to bring up our children.
And yet, in the last budget, the only senior women in the cabinet presided over the proposal to cut lone parent benefit once their youngest child reaches 7 years of age.  The rationale behind this savage cut is that by then the child would be in school and the lone parent (usually a mother) should be back to work.
Reality, as we know is that not only are there no jobs but there is little or no affordable childcare.  The same minister has said that she will not enforce this strategy if there isn’t such childcare available… although one would then wonder why she is still insisting on a cart before horse approach.
But I sense something else going on in Ireland 2012.. something which I had hoped we might have gotten rid of… and that is a cavalier attitude towards single mothers (yes I am deliberately saying mothers) and their children.
I became a single mother in 1987 and back then, 25 years ago, Ireland still legally called my child ‘illegitimate’.  Things have clearly improved hugely, but I am sensing that there is still a low level judgmental attitude towards single mothers.  At the very least they must be seen as an easy target for this bullying approach by Government. I hope that the effective triumvirate of OPEN, Barnardos and The National Women’s Council and their campaign ‘7 Is Too Young’ is successful in drawing attention to this very unfair cut which ultimately will hurt children.
This undercurrent of discrimination against single mothers was also laid bare by the recent story of the young student in Munster who was refused a place in a secondary school because she was pregnant.  As far as I can remember the principal said that the school did not accept “those kinds of girls” and that his school would not “become a dumping ground for those rejected elsewhere”.  Enlightened times, indeed.  One wonders where the father of this child was.  Did his school have the pass judgement on him before allowing him to be a student?  Of course not.
But back to the removal of the lone parent allowance when a child reaches 7 years of age which raises another issue… and possibly an even more controversial one.  Should a Government have the right to force a parent of a primary school child out to work or should a parent (mother or father) have the right to stay at home and parent their child if they wish?
As a stay at home mother for ten years I feel very blessed to have been given the opportunity to do so.. but I also feel (brace yourself – here’s the controversial bit) that parents should be supported if they chose that one of them will stay at home to be with their children.  I am not passing judgement on any parent’s choice.  I also worked when my eldest was young and only stopped when my youngest was born.  I have used crèches.  I know all about the juggling that working mothers have to be brilliant at.  But for me being at home with my children for ten years was the most important work I have ever done.
Why should not all parents have the opportunity to do likewise?  I know there will be shouting about ‘who on earth is going to pay for that’ and yeah I don’t know.. But up to now we have all been content enough to allow lone parents claim a state allowance and for now, to leave that alone would be enough.
In the future, when we rebuild this country, morally, economically and practically I hope that we may have politicians and opinion makers who will value the work that parents who stay at home to care for our youngest citizens do.