This is what I hope will be the first in a series of blog posts about our visit to Australia to visit emigrant daughter, Carla. In this first post I focus on Australia’s amazing wildlife. 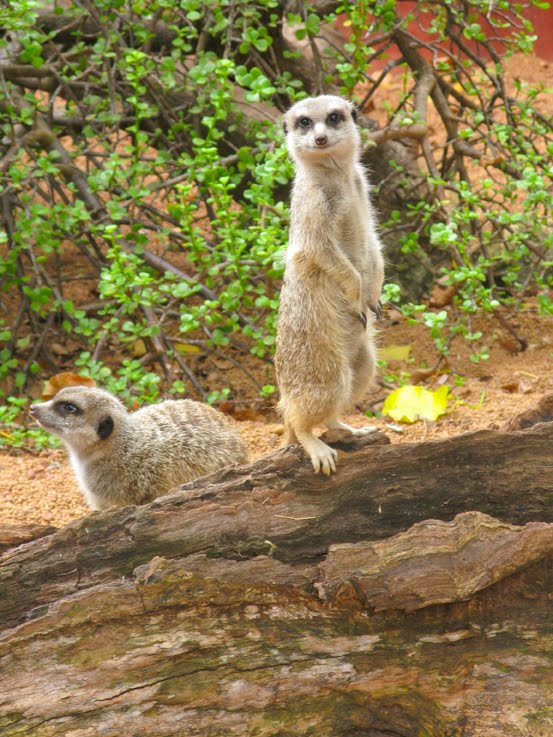 Stepping out of the modest terminal building, into the heat soaked air of late afternoon, on arrival in Perth, the first thing I noticed was the bird sounds. My ears were still tuned to the twittery gentle sounds of our little speckled brown birds but now they were assaulted by loud caws and something that sounded like demented duck quacking. As I looked up towards the trees around the car park there were flashes of blue and green as parrots and cockatoos swooped about conducting their own opera. After 24 hours travelling, this more than anything else brought it home to me that I was somewhere very far from home, somewhere exotic and somewhere with a unique beauty that was very different to Ireland.

We always check out the local zoo when abroad and Perth was no different. Like most modern zoos it was committed to animal welfare and conservation. We spend a happy day wandering through the habitats. But a day out to Cavesham Wildlife Park was one of the highlights of our holiday. Dedicated to native Australian animals, it provided us with an opportunity to get up close and personal with Kangaroos.

Being old enough to have fond memories of Skippy, I have a natural affection for roost but hadn’t expected them to feel so soft. They have a casual indifference to us humans and are very Aussie in their laid back, devil may care kind of attitude. We stroked them and talked to them sure they would be captivated by our Irish brog
ue. Nah, they were entirely indifferent. They also walk funny. When bent on where they are going, they zoom along on their back legs with help from their tail. But when just cruising around they kind of crawl – using their ‘hands’ also… making them look fierce awkward. The other weird thing is seeing mammy roos with babies in their pouches… sometimes upside down so it’s just a pair of little roo feet that protrude! I can’t imagine how suffocating it must be to have your little head stuffed into your mammy’s pocket when the temperature is 35 degrees! 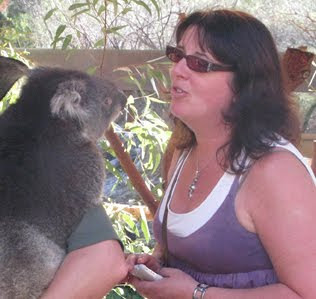 But for me the highlight of Cavesham was meeting a Koala. I have always been unmoved by Koalas. They look so cuddly but seem to have no personalities. But when I caught the eye of a keeper and charmed him (yeah – round of applause please for the ole wan still able to occasionally charm someone) into letting me talk to his Koala I was smitten. Her name was Karen and like all Koalas she spends 80% of her time asleep and the rest eating Eucalyptus leaves which seem to induce them into a kind of blissful trance. I stroked Karen’s back and she looked into my eyes and what can I tell you….. we connected….. on some level beyond physical communication. I am sure she still thinks about me! I hope she is well.

But if Karen the Koala was the highlight of Cavesham, for me the animal highlight of our trip to Perth was our day spent at Shoalwater Marine Park in Rockingham. Shoalwater is home to dolphins, sea lions, penguins and many seabirds including pelicans and osprey. We began our day with a trip out on a RHIB (rigid inflatable boat) to see dolphins. We cruised out to a couple of coves where we did indeed see dolphins (including a mother with a baby), all of whom were busy feeding and so weren’t up for engaging with us too much. My heart was beginning to sink, thinking ‘sure we’d see better in Killiney Bay any morning’ when our skipper announced that we were going to head out at high speed into open water to see if we could locate some more dolphins who had perhaps finished breakfast.

An exhilarating ride later and sure enough we found a pod of about ten dolphins who were all up for some craic. After watching them swim around and under our boat, Skipper then announces that we are going to see if they really want to play. “Can everyone move to the back of the boat so we can ride really fast and create some waves.” We all hung on as we shot through the water at high speed… “look out the back” the skipper called.

We all turned around and there behind our boat were the dolphins surfing the waves we were creating and jumping out of the water and clearly having a great time. It was sublime joy – for them and for us. “If no one is in a hurry back, let’s do that again” says the captain. Not surprisingly no one objected. It was magical and emotional…. the sheer joy of living that these dolphins exhibited was infectious. The sad fact is that dolphins in captivity – you know the ones in the dolphin shows in theme parks etc – on average live for about ten years. In the wild a dolphin will generally live to be about 45. I ask you to consider this before you visit a dolphin show! 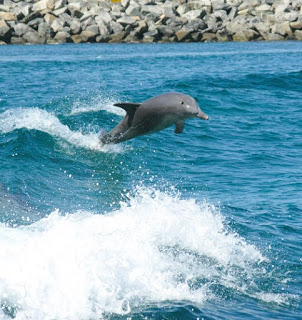 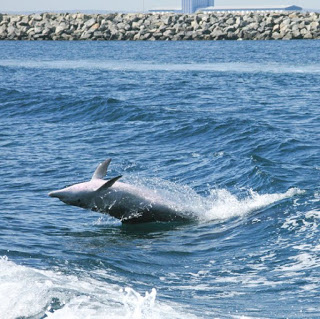 We took our leave of the dolphins and cruised to ‘seal island’ – a colony of rare Australian sea lions. We viewed them from the boat as they sunned themselves on the beach above which was a pelican rookery. A flock of about 6 pelicans swooped low over the water within feet of the boat, as we watched young sea lions play in the shallow water around the boat.

We saw ospreys fishing off rocks, ancient fossilised cliffs and finally paid an onshore visit to Penguin Island where we swam in the clear blue green water of the Indian ocean. Afterwards we sat on the sand as the sun dried us and I felt that old childhood feeling of salt tingling as it dried on my skin.

As the sun sank towards the horizon we took the ferry back to the mainland to our car for our journey back to Perth. It is a day I will remember forever as being as darn near perfect as it is possible to have!

Photos are all, of course by Paul Sherwood. www.sherwood.ie