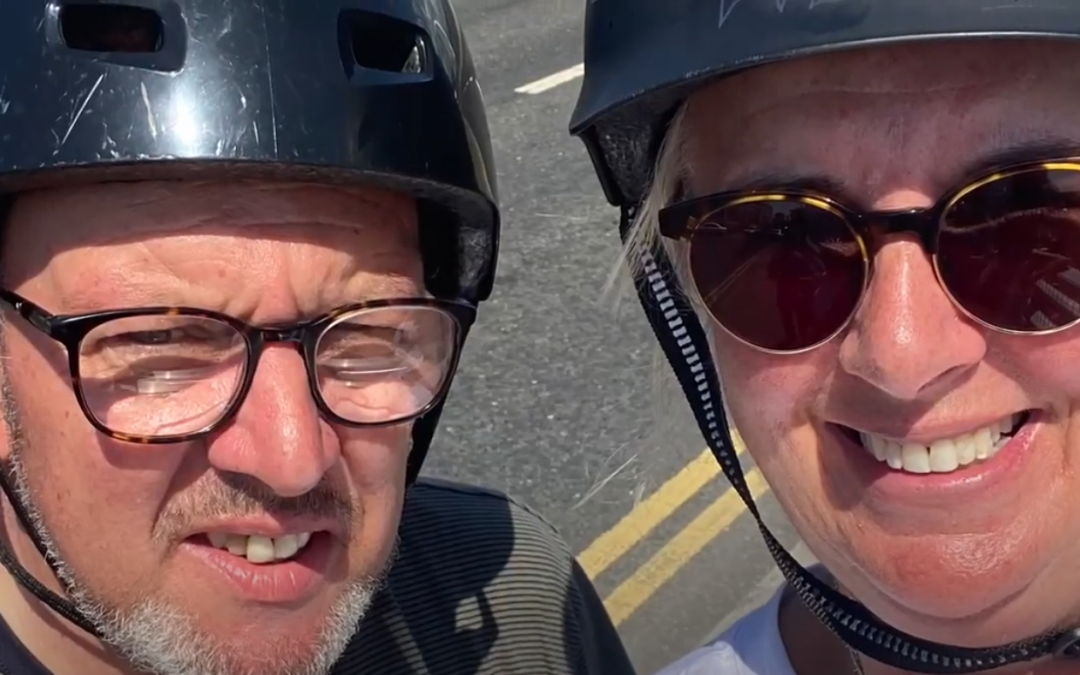 A guide for ole wans!

Greenways are on the increase in Ireland.  They are combined walking and cycling routes which often follow a former railway line or sometimes canal or even a river.  What all these have in common is that they are reasonably flat.  Not completely flat all the time… but reasonably.  They are a magnificent way to get under the skin of a location and really see the beauty of the scenery, especially if you are lucky enough to get good clear weather.

Last week, myself and Sherwood along with two friends took ourselves west to give the Great Western Greenway a try.  Now, if you follow me on social media, you will know the following about me:

I am 59, a bit overweight, and only moderately fit.

I have taken up cycling in the last 18 months and use my bike as much as I can in Dublin.

But although I have been on two wheels for well over a year I still get, how can I phrase this delicately – I can’t – so a sore arse at about 23kms.

This information is important because, believe me, if I can cycle – anyone can cycle.

The Great Western Greenway follows the old Westport to Achill railway line and is 42km long in total.  So with my poor arse in mind we decided to spend one night in Westport and cycle to Newport and back (11km each way) and two nights in Mulranny so we could head to Achill one day (13km each way) and perhaps head back to Newport on the third day (18km each way).

DAY ONE:  Westport to Newport 22 kms out and back.

Finding the ‘trail head’ (I think that is the right term) in Westport involved a big old hill – so we pushed the bikes up the worst of it, found the beginning of the Greenway where one can ring a bell to signify the beginning of your adventure and off we peddled. It was mid afternoon and a glorious day.  We began in a green corridor of overhanging trees, under old railway bridges, out into open country side which felt like we were cycling through fields of curious cows.  We passed a repurposed old fashioned phone box which served as an honesty shop for fresh eggs and onwards running alongside the road into Newport where we found a great pub in which to replenish ourselves with a cold beer, before heading back to Westport.

A word here – you might feel it’s a waste going out and back along the same route but believe me doing so provides you with a 360 degree overview of the countryside.  You would be surprised at how different the views are depending on the direction in which you are cycling.

Without a doubt this is the most scenic part of the Great Western Greenway.  If you stay in The Park Hotel Mulranny, the greenway conveniently runs right at the back of the hotel where the old railway station has been converted into a convenience stop – with a small shop, tap for refilling water bottles and toilets.

Heading out of Mulranny you pass through another tunnel of green before the view opens out onto the water leading out to Bellacragher Bay. The beauty of the landscape is just stunning.  At times, especially on the return leg when the Nephin Mountains are on the horizon, it felt like I was cycling into a painting.

Reaching Achill we made our way to the nearest café, where we had lunch at a picnic table in the sun.

The cycle back to Mulranny was hot but beautiful and a wonderful, magical day was completed with a swim at the beach across the causeway from the hotel.

DAY THREE – Towards Newport and to Rockfleet Castle. About 25km out and back.

As we had already been to Newport, we decided to only cycle about 7km of the Greenway from Mulranny and cut off at the very well signposted Nevin’s Newfield Inn.  A few hills to walk before you reach the Inn where we had a welcome coffee and got great directions from the man himself on the best route to Rockfleet Castle.

Rockfleet Castle was Granuaile’s stronghold in Mayo and is reputedly where she died.  She  also had a castle on Clare Island.  I wanted to pay homage to this fierce Irish woman of the middle ages.

Our route took us off down a boreen full of twists and turns.  The silence was so complete it was almost loud. The sun was hot and the air heavy with the vanilla scent of meadowsweet and the sweetness of wild honeysuckle.  We reached the shore by an old graveyard and well.

Cycling on, Rockfleet finally came into view and much to my disappointment it was shrouded completely in scaffolding.  Grainne was having work done!!  But hopefully that work will help preserve this magnificent castle which holds the memory of a powerful pirate queen in its thick walls.

We then decided (well, we didn’t – he did) to cycle back along the main road thinking it might be quicker.  I don’t know if it was or not but it was a bit hilly and scarey with no hard shoulder should you decide to walk a bit.  We arrived back in Nevin’s sweaty messes but recovered over a lovely lunch and then made our way back to the Greenway and back to Mulranny.

Another swim was in order to restore our bodies equilibrium.

The surface of the greenway varies from tarmac (easiest to cycle) to gravel which can be a bit more nerve wracking.  There are crossings over roads clearly marked and you will also encounter lots of cattle grids which are safe to cycle over.  And there are sheep.  Lots of sheep wearing multicoloured stripes of ownership.

Cycling the Western Greenway in summer – make sure you have lots of water.  There are no stops between the towns/villages.