DO WICCANS HAVE HYMNS? 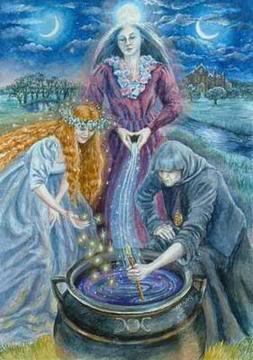 As I listened to Enda Kenny’s speech last week, I could feel the hair stand on the back of my neck. Not because Enda is a powerful orator – because he is not – but because I was aware that I was listening to history being made. I was listening to Ireland moving out of the shadow of the Catholic Church and into the light of a new dawn.

I have long struggled with my relationship with the Catholic Church. It was easy to turn my back on it completely when I was a teenager, only visiting at Christmas. The ostentatious wealth of the church with its hierarchy of celibate men living in luxury at parish level and in the splendour of palaces as Bishops, galled me and seemed very far from the life of Jesus. But as I got older I became aware of a deep need for spiritual element to my life… there was a void where the church used to be. I really deeply wanted to feel a connection with ‘my higher self’, my soul, my connection to the divine, or all that is.

Then my brother died, very suddenly and I was lost. So was my family. A local priest visited us and helped us prepare for the Catholic ceremonies of death – the removal and funeral. That priest was wonderful. He spent hours with us – learning about my brother so that on the day he delivered a homily that was so ‘right’ and so personal about my brother, it was almost impossible to believe he had never met him. To this day, I think the very best ritual of Catholic Church is the funeral Mass.

After that I thought that maybe I should stay with the church – try to affect change from within? But when my second daughter was born, almost 13 years ago I had something of a spiritual awakening. Deep in my bones I suddenly became aware in a very raw way that the Catholic Church’s attitude to women was not only wrong but deeply offending to me and indeed to God. Who was this Father God? Having just given birth I knew that God has a feminine face. I wondered should I become a Wiccan.

As my children (all daughters) got older they attended the local National School and so were ‘streamed’ for Communion and later Confirmation. As they began preparations I told them it was entirely up to them as to whether they wished to make either sacrament. I did this only to appease my conscience – not because I thought they would opt out – think of the money they would not make! But that’s another blog post. So we embarked together on the preparations with me constantly reminding them that most of what the church teaches especially around sexuality is completely wrong. “Confession is also nonsense”, I told them. It was far from ideal in my mind – a typical Irish solution to an Irish problem.

So we are now (more or less) all official Catholics in name only. We don’t go to Mass. I have tried to teach them the comfort and power of praying. I have tried to help them to imagine a different God to the Father God of the Catholic Church. I have stressed the importance of personal responsibility and of helping each other. I have told them that Jesus asked us to “love one another”. Everything else is baloney.

I know I am someone who has stood with one foot still inside the church door for the last 13 years. I have kept it there hoping that the Church would change. I was afraid of throwing the baby out with the bathwater. And so I held on – on the edges.

But it’s very unsatisfactory to live like this, especially when I have a deep need for a spiritual dimension that is rooted in community. I can plough a lone furrow with my own brand of spiritual code, but I miss walking into my church at Christmas greeting my friends and neighbours. I know that the next time I have to face a close death, I will be looking to the only place I know in order to help me make sense of death and to facilitate a fitting send off for my loved one!

I have not entirely resolved any of this dilemma. But I no longer feel alone. Enda Kenny’s speech in the Dail last week, was powerful because he articulated the feelings of the majority of people on this island. He said what I am thinking. I was relieved to hear his anger and outrage. I was also relieved to know that our Government, unlike all those that preceded it, will no longer allow the Catholic Church to place itself above the law and beyond reproach.

I would love to think that the Catholic Church might reinvent itself completely from the top down, divesting itself of its wealth and pompous attitude, allowing women to take an equal role and proclaiming that sex is a wonderful gift from God. I wish it would because I will still miss the way Christmas hymns sound in a sacred space, the feeling of community that belonging to a church brings, and the rituals to mark life’s milestones.

I know they have no churches but I wonder do Wiccans have nice hymns.

Image of the Triple Goddess – honouring women in the three phases – Maiden, Mother and Crone (moon in her waxing, full and waning phases). By ecowitch on photobucket