I’M WITH THE IRISH STAND AGAINST TRUMP 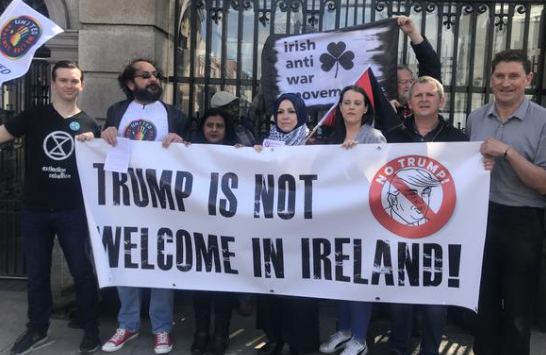 If the last couple of months have taught me anything, it is that I am an eternal optimist.  To the point of possible stupidity.

I wasn’t surprised when Trump won the Presidency and even though I wasn’t at all happy, I comforted myself by thinking that he will be surrounded by the machine that is the office of President of the United States of America, and this will prevent him from dragging that office into disrepute and the country into chaos.  How naive was I?

I watched the horror show that was his inauguration.  His complete lack of basic manners and any sign of affection for his wife, Melania was unnerving.  His speech was bombastic and lacked any of Presidential vision.  I wondered if he knew that he had won, that he was President.  But I still hoped, that now that he had proved he could win the highest job in the world, he would just put his head down and be, at worse, an ineffective president who ultimately achieves very little.  Such fairy stories helped me sleep at night.

Immediately after he was installed in Washington, the debate on whether the Taoiseach should go ahead with the annual visit to the White House to present a bowl of shamrock, began.  As someone who is allergic to sulking, I have always believed that communication is the way to resolve contentious issues.  I agreed with Leo Varadkar and Enda Kenny that we should keep this standing date on March 17th and not throw away this annual privilege of having the ear of the so called ‘leader of the free’ world (and never has a title been so inappropriate).   When has ‘not speaking’ ever solved anything?  Dialogue is key.

But I have changed my mind, for a number of reasons.  Talking to Donald Trump will not make any difference at all.  He doesn’t care that millions of his own people are protesting on the streets, he isn’t going to give a hot damn what the people of Ireland think.  Trump is not just some odious, semi-literate, bad mannered, orange man.  He is a hateful, dangerous, racist, misogynist who pedals fear and suspicion and mis-information.  If we turn up at the White House delivering a bowl of shamrock, even with a mild chiding from Enda, it is the photos that will be remembered.  Ireland celebrating our national day with Trump.

But the main reason that I now believe that we should not attend the White House this year is not about America, it is about us.  It is about who we are in Ireland.

We are a country whose actions often speak far louder than our words, which is ironic considering our literary reputation.  We have dispatched our Defence Forces to the Mediterranean to assist in the rescue of refugees and as a nation take great pride in their sterling work.  We still donate more than most countries to those less fortunate.  We have a great well of empathy and compassion in Ireland but too often we still speak out of both sides of our mouths.  We still cannot seem to overcome, our seemingly instinctive urge, to stay on the right side of the man in the big house.  This tendency, which makes us appear mealy mouthed and cowardly, is no doubt due, in large part, to our history but it is this very history that should propel us to be braver.  To be better than that.

Ireland is a first world country, that has experienced colonisation, that has never invaded anywhere but that has been a breeding ground for terrorism in the very recent past.  Anyone who travelled to the UK during ‘the troubles’ will know how unnerving it was to be viewed with some suspicion purely because of your nationality.  But this unique history gives us a moral authority that belies our small size and it is this which should compel us to make a principled stand against a racism and injustice.

New York, that confident, multi ethnic, exuberant city, knows more than any other in the US about terrorism.  Yet New Yorkers led the protests in the immediate aftermath of Trumps Executive Order restricting travel from certain countries.  Sometimes we can over think things.  Sometimes we just need to do what is right.

So, I am firmly with Aodhan O Riordain in taking a stand against all that Trump stands for.  I am mortified that all the signs are that our Taoiseach will fudge it by making gentle noises of disapproval while smiling and joking with the President of the USA over a bowl of shamrock.  Why can we not overcome our mortifying instinct to show that we are still pals with the biggest boy in the class?

The decision by our government to keep the annual St Patrick’s date in Washington with President Trump will have little effect on him or on America.  But their decision reflects very poorly on who we are as a people.  It should not be allowed to define us and our values.