LET’S JUDGE A PAUSE THERE SISTERS….. 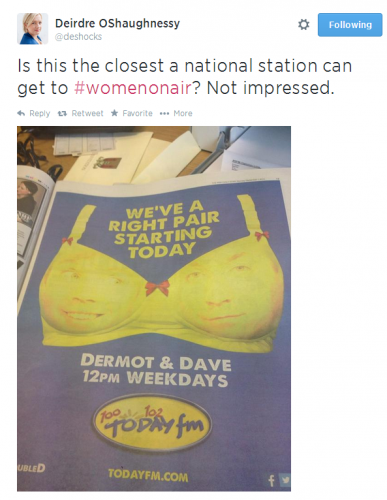 Sometimes being a feminist is kind of confusing.  It is very easy to become hyper aware of anything that could be viewed as being degrading to us women.  And if you look hard enough you will find such things everywhere.
But it is vital that before we decry the culprit that we take a wee moment to think.  I know that I don’t want to live in a world where we are ultra politically correct all the time at the expense of our ability to laugh at ourselves – individually or collectively.  Therefore when your senses are assaulted by an image which shouts ‘foul’ or ‘this is sexist’ as a friend of mine says ‘judge a pause’.
Three such images appeared in the media this week.  As first glance all three looked sexist but in actual fact only one was…. in my humble anyway.
First up was the full page ad that Today FM took out to announce two new male presenters of their lunchtime show.  The ad featured a bra with the male presenters featuring in each cup and there was a tag line of Double D a play on the image and the fact that the presenters are called Dermot and Dave.
Next one that crossed my consciousness was the image used in a campaign that has just been launched by Concern and Women’s Aid called ‘Are You Man Enough To Walk In Her Shoes’  There was a cartoon image of a male figure in a pair of high stilettos.  I guess is asking men to try to imagine what it feels like to be a woman – and a vulnerable one at that.
The last image of the week appeared in the Irish Times yesterday.  It was a PR shot to announce the Cancer Society’s Paint It Pink campaign.  It featured RTE presenter Keelin Shanley (a breast cancer survivor) dressed in pink holding a tin of paint and a very attractive bare chested young man up a ladder supposedly painting the door.  As someone who worked in PR and the partner of a professional photographer it was most definitely a cracking photo which drew the eye in immediately.  The image was also used in The Journal and can be seen here.
So your honour, which of these images is guilty of being sexist?  Only the first one.  Why?  Like most other things in life, because of the context.  This ad featuring male presenters’ faces on a bra is sexist because it was put out by a radio station that has not one female presenter presenting a daytime show during the week.  It is boys radio and so therefore cannot use women’s breasts to advertise a programme not matter how clever the play on words.  If the station doesn’t think that women should present primetime radio shows, then they can leave our underwear out of their campaigns.  So Foul and Sexist can be correctly labelled to this ill conceived campaign.
The second campaign ‘Are You Man Enough To Walk In Her Shoes’ I don’t have a problem with even though I don’t own and never had owned a pair of high shoes.  But I know that makes me the exception rather than the rule where women are concerned.  Most women I know own and wear high heels – not every day maybe but regularly.  Therefore it’s fair enough to use this fact to come up with a fun campaign to raise money for vulnerable women.  And high heels do make women vulnerable… but that’s a different column.
Lastly, the PR photo for cancer that featured Keelin Shanley and male model Darragh Hayes was simply a great photo.  Mr Hayes is a model doing what he does best – looking delicious.  Irish (female) models regularly post in bikinis to promote all range of weird and wonderful products.  Yes I agree it’s a lazy photocall but I believe if we even up the score a bit – more handsome chaps looking.. handsome I can live with it.  I am not sure I want to live in a world where being able to admire a beautiful body is outlawed in case it offends someone.  As long as it is models that are used and the score is even – as many men as women – so what?
As we become more aware of women being undermined and belittled we are in danger of over reacting.  We need to bear that in mind, sisters!