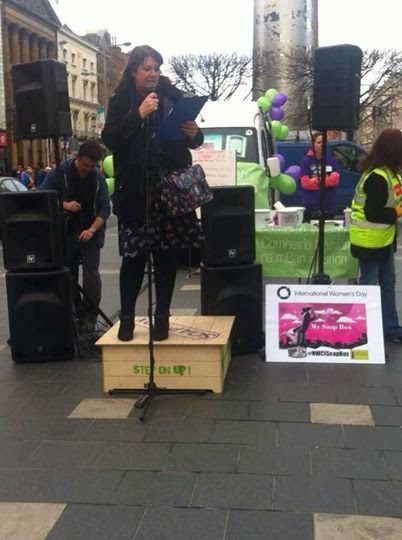 International Women’s Day and I was invited by the National Women’s Council of Ireland to take part in their SOAPBOX event which took place in the middle of O Connell Street – just opposite the GPO.  A place famous for oration… some more glorious than others.  It’s also around the corner from some of Dublin’s most formidable women – the fruit sellers and traders of Moore Street, whose powers of making themselves heard over the din of the city is legendary.  I didn’t sell any bananas but I was honoured to take my few minutes on the soapbox.  Here is the text of what I roared!

Michael Harding wrote one of the most lyrical and beautiful columns I have ever read in the Irish Times last Tuesday.  It was called What I Love Most About Women Is Their Voices.  He began by saying that while his father was in the dining room talking about God, his mother was in the kitchen talking to another woman.  His father called it gossip – “what are you women gossiping about now?”  But Harding says “my father was full of ideas – but mother – full of stories – was always more real.”  He went on to say of women “They share a ‘knowing’ beyond words. …. They know things men don’t know.  They shelter men in the fabric of their knowing and they intuit a deeper universe when a man’s world is falling apart.”
It certainly is time that this world of man’s design fell apart.  It certainly is time for women to demand much more than just equality with men.  It is time for us to demand a new world; a world in which we can participate fully and as equals but a world which acknowledges that we are not men; a world where we can express our womanhood without fear that it will be perceived as weakness.
All women are heroes in my opinion.  We bleed every month which can often make us feel like crap but we carry on with our jobs, paid and unpaid, pretending all is fine as we pop another nurofen and dream of reaching home where we can fling ourselves on the sofa with a hot water bottle and a bar of chocolate.  I know menopausal women who suffer horrendous periods which are challenging in a practical as well as physical way – and they carry on working wearing black a lot and praying a lot that their super plus extra sanitary protection doesn’t let them down.  Would men be so silent if roles were reversed?  Would they hell?
How many women are afraid to display photos of their kids on their desks in case it gives the game away.  How many women miss their new baby so much when they return to work after maternity leave that it causes physical pain?  How many women wish they could take a couple of years of reduced hour working  in order not to miss their children’s early years?  How many women hate that their children are in crèche from too early in the morning till too late in the evening?  And why do so few women articulate these feelings openly?
I know some men feel all these emotions too.. but today is about women.
How come we live in a modern and relatively wealthy country where we have unsafe maternity services and where we have so little choice in those services?  And how come we are not raising a holy racket about it?
But most of all how come we live in a country where the work of caring is so undervalued.  Our children are our most precious asset – both individually and nationally.  So how is it that the people who care for them are in general working for a minimum wage?   And of course this is equally true for those working in nursing homes – caring for our most vulnerable elderly.
Care, that most traditional of women’s work, should not be left to either charities or the private sector.  Caring should be heavily subsidised by Government in the same way education is and should be run by professionals on a not for profit basis.
Michael Harding spoke of women’s voices.  And yet the day after his beautiful column appeared in the Irish Times, we heard that 1 in 3 women in the EU have suffered physical or sexual abuse.  The figure is 1 in 4 in Ireland.  That means women in our neighbourhoods, perhaps in our families, in our circle of friends have or perhaps still are, experiencing violence.  And yet they are largely silent.  There still exists a shame and stigma to admitting that our vulnerability, that which is part of being a woman has been cruelly and viciously exploited.
But before we can change the world we must change ourselves.  As a women’s movement we must recognise that we women are as different as we are the same.  We don’t all necessarily want the same things.  Equality is essentially about choice.  The choice to be yourself.  It is vital that we recognise the right of each woman to make the choices that are right for her. And we need to support each other regardless of how we personally view those choices.  Ni neart go cur le cheile
We are 51% of the population and here we are marking an International Womens Day at an event organised by the National Women’s Council of Ireland.  I hope that some day our  grand daughters and great grand daughters can laugh at the madness of such a concept.
Michael Harding finished by saying that “women have been my compass, my anchor, the ground and the completness of my universe.  As I grow older they are the warp and weft of all my spiritual hope, because it was women’s eyes that saw Christ resurrected and it was women’s voices who sang the song of it – until they were silenced.
It is time to break our silence.  It is time for us to sing our songs, to tell our stories, to support each other and demand the changes we need to fulfil our destiny to change the world.  Our men need us as women and our grand daughters are depending on us.