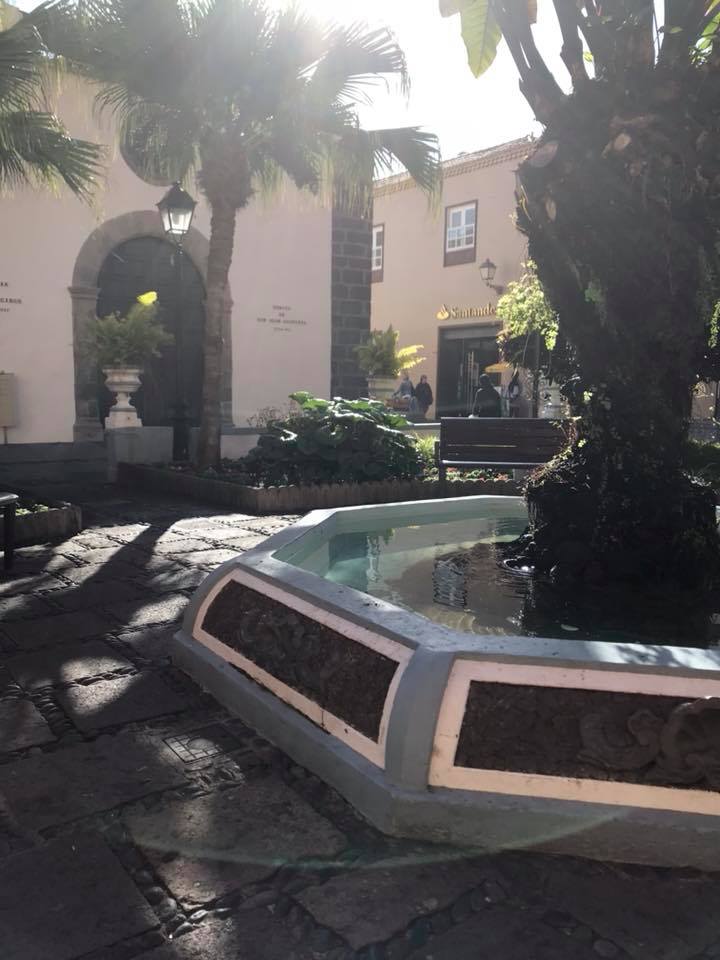 Having just returned from a wonderful few days back in one of my favourite places, I thought I would share this which was written back in 2012 and featured on RTE Radio One’s Sunday Miscellany.

We soon realised we were on the wrong bus.  Instead of heading out of Las Americas and onto the motorway towards Santa Cruz, our rather rickety bus took what looked like a Canarian boreen and headed uphill, snaking it’s way north.  We looked at each other realising that we had just made the mistake we had been warned not to make.  “Make sure the bus is marked Directo” the rep had said, “otherwise you won’t get to Puerto de la Cruz till well after dark.”

We settled down for what was clearly going to be a long journey.  But only a mile or two later, the bus pulled into a tiny, dusty village and came to a halt.  The male passengers disembarked along with the bus driver.  The women stayed put, including the one with the hen in a box.  About fifteen minutes later the men all arrived back onboard and the bus spluttered its way on.  A couple of miles further on and we pulled into another village, bus stopped, and the men disappeared while we sat, completely confused and a little amused.  We were the only non locals on the bus.

At the third village, curiosity got the better of us and so we made the decision to disembark with the men and see where they were going.  There was a murmur from the senoras in black as the two Irish hussies followed the boys ……  into the local bodega. The men smoked a cigarette, had a shot of some local brew, spat on the floor and gurgled away in guttural Spanish.  We had a quick cortado coffee, our curiosity sated.

The bus continued to make its leisurely progress and as we climbed higher, we reached into our bags for our sweaters.  The sky was blue and the air was crisp as Mount Teide wore her year around collar of snow.  We gazed out the grimy windows at the volcanic lunar landscape just below the crater of this mountain, Spain’s highest.

Soon we were descending, and the stops on this leg of the journey were the normal bus kind – picking up and dropping off passengers.  We drove through pine forests above the clouds, finally sinking down into the Orotava Valley as darkness fell.  We rounded yet another bend and I caught my first glimpse of Puerto de la Cruz, her flickering lights reflected in the water of the Atlantic Ocean.

As we reached the banana plantations on the outskirts of the town I had the oddest feeling that I was home.  We had come from the south of Tenerife which is barren, dusty and desert like.  It gets the best of the weather with lots of sunshine and little rain.  But the north is a different world.   It’s lush and tropical and much older than the purpose built resorts of the south.  I was 18 years old that day when I stepped off that old bus in Puerto de la Cruz.  I remember breathing in the cool air and something deep inside me recognised this place as somewhere very special.

Over the following years Puerto de la Cruz became my second home, my refuge, my holiday haven.  Working in the travel business I was able to fly south, to this island town in the Atlantic Ocean, off the coast of West Africa at least once and often twice a year.  Each time my arrival was no less of a homecoming than the first.

I always stayed in the Bellavista Apartments built into the cliff face in an area known as La Paz, overlooking the old town.  I would sleep with the balcony doors open so that I could listen to the sound of the waves crashing far below.  In the morning I had a view over The Lago – a complex of sea water swimming pools located on the seafront.  Every second morning the pools would be filled by the giant fountain in the centre of the largest lake.  I would drink my coffee and watch the tumbling water sparkle and create mini rainbows in the morning sun.

Later I would walk down to the town.  Through alleyways of steps I would pass under windows with shutters thrown open letting fall a cascade of rapid fire Spanish from various competing TVs.  I passed doorways where women in aprons perched on kitchen chairs chatting as I smiled and muttered buenos dias.  I wanted them to know that I wasn’t just a tourist.   I was a part of this place that I carried in my soul.

Days spent in Puerto de la Cruz were long and lazy; swimming in the lago, drinking coffee in the Plaza del Charco, sunset walks along the sea wall by San Telmo enjoying the Spanish ritual of the evening paseo. The nights were full of romance and sweet nothings.  I danced in trendy nightclubs, drank rough red wine from earthenware jugs, listened to live Flamenco in a dark and gloomy cellar bar and made some interesting local friends.  I did a lot of growing up.

Some years later when life threw some very curved balls my way, it was to Tenerife and to Puerto de la Cruz that I retreated.  Happily alone I let the island work its special magic on my bruised and battered soul.  It didn’t let me down as it delivered precious gifts and treasured memories which keep me warm and sane to this day.  It must be nearly time to return.