So among the many celebrities who tweeted about the death of Margaret Thatcher was one Mr Harry Styles of those nice boys One Direction.  Harry tweeted “RIP Baroness Thatcher x”  Succinct.  Uncontroversial.  The reaction of the One Directioners was brilliant however and was captured by @counteractmagazine….(via @peteheat) 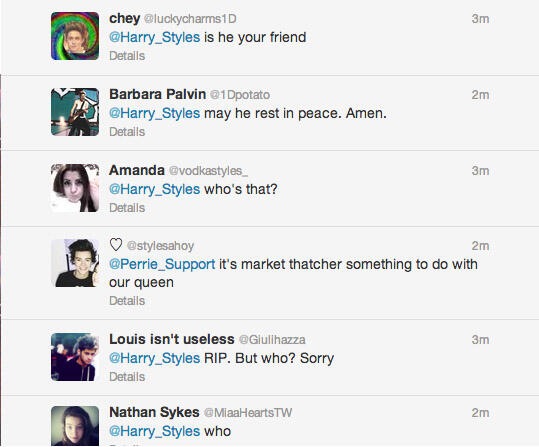 I live with two such One Directioners – ages 12 and 14, and over dinner last night the 12 year old asked why all the fuss about the death of Margaret Thatcher.  She wasn’t too clear on who Mrs Thatcher was.  Her older sister knew she was a “British Prime Minister from history”.  Sometimes my children make me feel very old.
Margaret Thatcher came to power in Great Britain the year I left school, 1979 – so in many ways she helped shape the world into which I emerged.  However as a 17 year old I was far more interested in having fun and boys than in politics and so wasn’t really that bothered about her views on deregulation and privatisation.
Those were dark days in Northern Ireland with violence and killing becoming so normal that their reporting was almost reduced to a kind of white noise on news bulletins.  But every so often something happened to make the horror of what was happening just 80 miles up the road very real.  Bloody Sunday was one such day.  The killing by mob of the two off duty soldiers in 1988 was another.
As was the 5th of May 1981, the day Bobby Sands died.  I was 19 and on holiday in Majorca when news came through and I remember my disbelief that Sands, who had been elected to an MP while in jail, had actually been allowed die. In the full glare of the world’s media, the British Government had just allowed him to die.  I remember hearing about rioting in Northern Ireland following news of his death.  But most of all I remember the British newspapers in the following days reporting the words of Thatcher in the aftermath of what she termed Sands’ suicide. “Mr. Sands was a convicted criminal. He chose to take his own life. It was a choice that his organisation did not allow to many of its victims”.
The British Government stuck to their hard line stance.  And the horror continued.  Despite appeals from various parties and especially from the women involved including mothers, the IRA hunger strikes continued and men kept dying.  Margaret Thatcher didn’t flinch.  It was a darkly depressing summer full of foreboding and a deep sense of unease over where this might end.  The last man died in mid August.  By autumn the British Government had conceded to the prisoners demands.
I sat at my suburban dinner table last night and tried to explain ‘the troubles’ to my daughters who are half English.  I really couldn’t illustrate the horror I saw almost nightly on TV news bulletins through the 70s and the 80s.  I was at a loss to explain how, although taking place on this island, the troubles seemed remote until something happened which we feared may escalate tensions and drag us also into the quagmire of death and destruction.
The hunger strike deaths of the summer of 1981 carried just that fear with them.
As I looked at my children’s faces as they listened, I realised that I may as well have been describing a movie I had watched some years ago when TV was black and white.  They had a passing interest but the reality and the real horror of what I was trying to articulate was lost on them.
As I stacked the dishwasher I thought of how precious peace on this island is… and if we are to learn anything from our past it is to guard, to protect and most importantly to nurture this ‘peace process’.  The men and women who worked so hard to bring it to a reality have given our children something very special.  As for the children of Northern Ireland they have given them their future.
As for Mrs Thatcher…. well I guess it would be true to say…  “ní bheidh a leithéad ann arís”.!  Please God.

Oh and tonight I may attempt to explain The Falklands War….. give me strength!