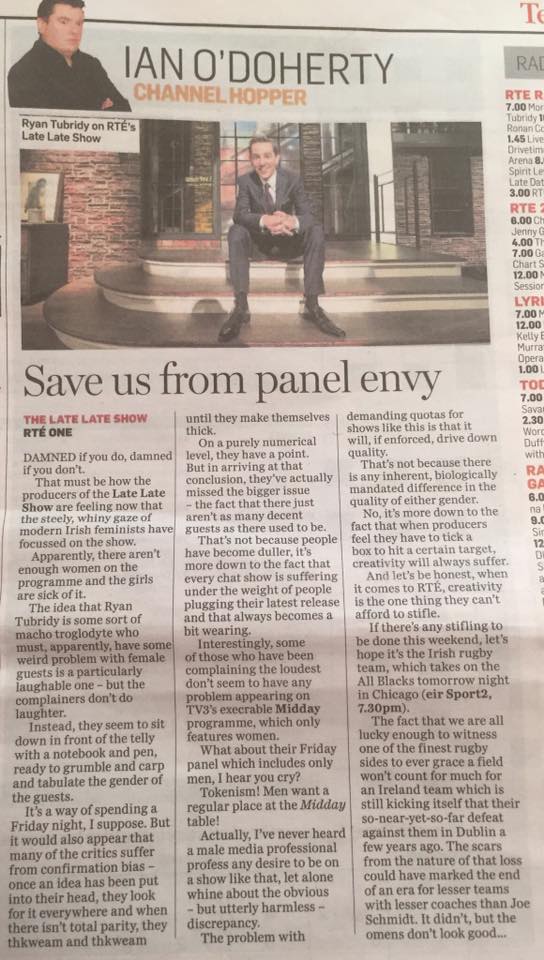 As some of you might know I have been very exercised by the lack of women guests on Ireland’s premier entertainment and chat show, The Late Late Show, since it began this seasons run in September.  I have been tweeting about it most Fridays using the hashtag #wherearethewomen.  Since this campaign started there have been two supportive pieces written by women – one in the Irish Times by Anthea McTeirnan and one in the Irish Independent by Lorraine Courtney.  And there was a piece by Ian O Doherty in last Friday’s Irish  Independent which is not online but you can read it from the photo above.

This is my response to Mr O Doherty.

I have many issues with the piece Ian O’Doherty,  wrote under the heading “Save us from panel envy” in last Friday’s Irish Independent.  He was referring to the building head of steam that feminists (male and female) are creating at the distinct lack of women on this country’s premier entertainment programme, namely The Late Late Show.  I have been one of the loudest critics of this phenomenon, mainly voicing my increasing frustration and anger on Twitter using the hashtag #wherearethewomen.

But back to Mr O’Doherty and aside from the fact that he didn’t have the manners to credit me with stirring this particular pot he also said that “the complainers don’t do laughter.”  That stung.  I love a good laugh and have even been known to provide a good laugh reasonably regularly.  Unfortunately, by mentioning this slight on my character (and indeed that of my feminist co-complainers) kind of leads me into feeling I have to make this piece funny in order to prove my point.  And I hate that.

But back to Mr O’Doherty who also thinks that we whiny feminists (paragraph one) sit down every Friday with pen and notebook in order to tabulate the gender of the guests, when in fact a pen and notebook isn’t necessary at all.  The lack of women is glaringly obvious, especially to us whiny feminists.  But apparently according to O’Doherty our complaining misses the point that “there just aren’t as many decent guests as there used to be.”  Seriously Ian?

Although in fairness I guess that depends on your definition of ‘decent guests’.  The Late Late Show has always been aware that it cannot compete with the big British chat shows who attract a good smattering of Hollywood mega-stars, week after week.  So, for home grown programmes often the best guests have been so called ‘ordinary’ people who have extraordinary stories to tell.   Panel discussions have equally always been a part of the Late Late landscape and often provide the talking points for the following day.  So, do women have not stories to tell?  Or maybe we just aren’t articulate enough to tell the story?

The second thing that stung in O’Doherty’s piece is when he mentions “some of those who have been complaining loudest don’t seem to have any problem appearing on TV3’s execrable Midday programme, which only features women.”  Yes. I am a regular panellist on Midday and I had to double check the meaning of the word execrable.  According to the Oxford dictionary execrable means “extremely bad or unpleasant”.  Unpleasant Ian? Why unpleasant?  Is it just because it’s an all-female panel (except on Fridays)?  Ahhh well, in fairness, I could understand how that might upset you. The Late Late Show has had two shows this season where there have been no women at all interviewed.  So I know that that can feel very, well weird.  You know, when you hold up half the sky, as men do.

Actually, it feels worse than weird.  It feels like you don’t exist at all.  It silences your soul.  Therefore Ian, I can see how watching Midday (do you watch it regularly I wonder) would make you feel bad about life and yourself. Viewing the world through an all-female lens would be just as disconcerting as viewing it through a predominantly male lens when you are a woman.

But imagine if every programme was the same Ian?  Imagine if you switched on the Late Late Show and it looked like Midday?  If you listened to the Marian Finnucane Programme on RTE Radio One and it sounded very like Midday?  Lots of men chatting away about the big stories of the week.

The lack of women’ voices, stories and opinions is a fundamental flaw in our media and one which needs to be addressed with a degree of energy and urgency, particularly by our national broadcaster who should be leading the way in gender balanced programming.

Demanding quotas you say will drive down quality.  How?  Because women are inherently less able, less interesting, less intelligent than the men we hear all the time?  Unconscious bias exists in all of us.  I acknowledge that it will make it a little more difficult for TV and radio producers to abandon their usual ‘go to’ contributors in order to ensure that women’s voices are heard, that our opinions are as much a part of the public conversation as mens are.  But I think our media professionals are quite capable in doing that without sacrificing creativity which Ian points out will be a natural consequence of such action.

Back to that word execrable.  The Oxford dictionary goes on to give its origins, which are late Middle English in the sense of “expressing or involving a curse”.  So I am thinking it was probably used back then about witches.  Plus ca change?  And this isn’t that funny either, is it?