This is the text of my piece on Owls which featured on Sunday Miscellany on 30th October 2011.
You can listen to the podcast here. I am first up just a minute or so in. 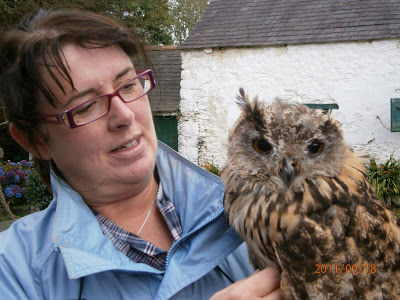 Standing on a hill in deepest Wicklow, a north easterly wind whipping my hair into an unruly nest, I tried to run through in my head what the Falconer had told us on the safety briefing. My fellow participants on this Introduction to Falconry day were spread out in a wide arc around me. High up, in the swaying trees behind us, watching our preparations, were two Harris Hawks.

A crimson morsel of raw meat was pressed onto the top of my closed fist. I extended my arm out and as I half turned towards the trees, the falconer blew his whistle. There was the incongruous faint tinkle of bells and the hawk swooped down from the tree and expertly brought herself in for a landing on my glove.

My breath caught in my throat and I could feel adrenelin pulsing through my veins. The meat was swallowed in a second and then this magnificent bird turned its head and stared me straight in the eye. I couldn’t remember what our falconer had said – it was either never look a bird of prey in the eye or do look them straight in the eye. Apparently their eyes don’t move. So our eye movements either annoy them or calm then. I couldn’t remember which.

It didn’t matter anyway, because I was mesmerised. Completely transfixed by the stare of the hawk. This majesterial bird, a wild animal to its very core, fully capable of inflicting serious damage should it so choose, seemed to be calmly looking into the very depths of my soul. 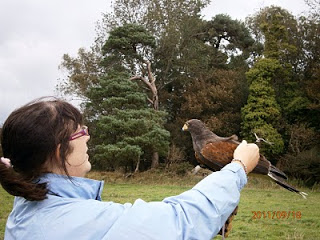 Without warning, she took flight again, swooping through the air, on to her next piece of meat. I watched her elegant flight until it was my turn once more. Raw flesh, a jingle of bells, a rush of air through feathers and those huge talons are set firmly on my gloved hand. Again, we stared into each other’s eyes and I carefully raised my right hand to stroke this bird on her back. Whoosh and she was gone.

The Hawk Walk was thrilling, moving and deeply satisfying.

There is a standing joke in our house that gets played every time I am asked what I want for Christmas or my birthday. “I want an owl,” I say and my children groan, at my rubbish attempt at being funny. But I am serious. I am deeply drawn to owls. Up till now I have only ever seen an owl in a zoo. I have long wanted desperately to get close to one without a barrier between us.

The first owl our Falconer introduced to us was a kind of miniature model, from Chile. A daytime hunter, this owl eats insects and such like. In the windy environs of Wicklow and with the air full of swallows, our little owl was a tad nervous. Her head rotated around and turned fully to stare upwards at the sky in comedic fashion.

Next up was what I would have called a normal sized owl. She flew to my bare hand for some raw meat and then continued to peck at my skin very gently. She was happy to be stroked and I smiled gormlessly at the joy of it all.

Our session was over and our falconer led us out of the yard. But on the way out he stopped to introduce us to a huge owl who was sitting on a tree stump at the door to the cottage. He handed me a glove and carefully manoeuvred this large bird onto my arm, all the while explaining that this was a ‘rescue owl’. An owl that had not been properly looked after. Who had been feed processed meat and so now was a bit of a couch potato. She could fly – but generally didn’t bother, her hunting instincts all gone through years of being ‘a pet.’

The more the falconer explained about this bird, the more I realised I had met a kindred spirit. In my mind I could see this big ole owl and me, perched on the sofa at home, watching The Late Late Show (what else would an owl watch) and munching on some nuts or chocolate, maybe having a glass of wine. This was a wise old owl, albeit a somewhat overweight and out of condition one. I stroked her feathers which were soft and downy. She turned to look at me and we connected. Here was an owl with miles on the clock, with years of experience, who had no doubt seen things no owl should see. She wore her years on the outside.

But on the inside she was a majestic bird, a hunter and thinker of deep thoughts. We gazed at each other and our thoughts fused in the space between us. Yes, she said I am Owl. I can see the unseen. I can know the future. I can read the moon. Yes I said, I am woman. I too can read the moon. I too could know the unknowable except unlike Owl, I have forgotten how.

As I reluctantly took my leave, I pondered on the wisdom of owl and what we humans have lost in our pursuit of technology.

An Introduction To Falconry with Falconry Ireland, Woodenbridge, Co Wicklow

Thanks to Barry Lenahan for the great photos