A PASSAGE TO HOLIDAY MEMORIES 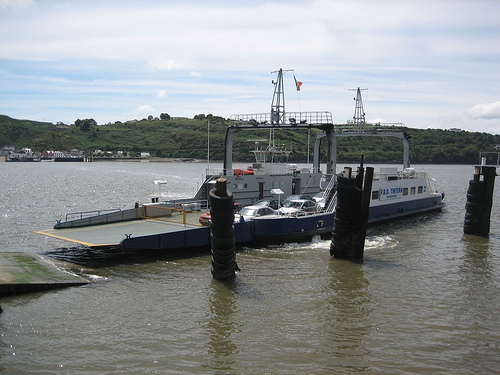 An item on the RTE News the other night, triggered a deluge of very happy childhood memories for me although the story itself was sad. It featured the little Waterford village of Passage East, on the River Suir and the herd of feral goats who live on the steep hill there.
Local lore says that this herd of goats, one of the last herds of wild goats in Ireland, swam ashore from the Greek sailing ship over 200 years ago. They have lived on the hill ever since and are very much part of the village. They were on the news because some days ago 20 of the herd disappeared overnight, leaving just 8 goats behind. Local people are rightly angry and a reward has been offered for their safe return. However it is widely suspected that these goats were stolen to order and so it is unlikely that their safe return is, at this stage, still a possibility.

Every year our family, like most at that time, holidayed in Ireland. We usually rented holiday houses in various locations around the country. One year we went to Passage East and loved it so much we went back the following year too. They were great holidays. I reckon I was about 10 or 11 years old.

The first year we were there, my brothers and I spent hours sliding down the goat hill on flattened cardboard boxes. I don’t know how we didn’t sail right off and land in the road – but we didn’t. When we weren’t careering down the hill, we used to hang around on the little pier where the ferry across the river went from. Nowadays there is a small car ferry joining Waterford with the Wexford village of Ballyhack. Back in the 70s however the ferry was a small rowing boat with an outboard engine which was operated by an elderly man called Patsy. If our luck was in Patsy might only have one or two passengers and so he would take us with him for a free trip. Best of all was when he would launch his little ferry just after a large ship had passed upstream (on its way to New Ross) and we would enjoy the rollercoaster like thrills of riding in her wake. Needless to say there wasn’t a life jacket in sight – and we generally didn’t ask permission from our parents to go out on the water either!

In the evening we would again be down on the pier waiting for the fishing boats to come in. They fished for salmon and once the boxes of fish were unloaded, the fishermen would usually keep a fish or two for themselves. So we would be engaged to carry these large salmon in our arms up to the fishermen’s houses. We would come back to our holiday house shimmering with fish scales, stinking of salmon but with a 10p to spend in the one village shop.

The second year we holidayed in the village, my cousin Bernie came too – female company for me who God had consigned into a family with only brothers. A year can make a big difference when you are about 11 or so and although I am sure that I might have ventured into the ferry a couple of times with Patsy, I think I had given up the hill sliding and definitely the fish carrying. That year Bernie and I spent most of our time hanging out the local boys! My memories are of long summer nights swinging on a makeshift swing hung from the rafters of a derelict building by the beach. The soundtrack that summer was ‘Knock Three Times (on the ceiling if you want me, twice on the pipes if the answer is no)’ and ‘Chirpy Chirpy Cheep Cheep.’

The innocence and the excitement. When we drove out of Passage East at the end of the second holiday I remember all the boys were waiting by the village sign to wave us off. I then had to suffer the entire journey back to Dublin being slagged by my very immature brothers about my ‘holiday romance’.

Photo of current Passsage East Ferry by lhourahane on Flickr